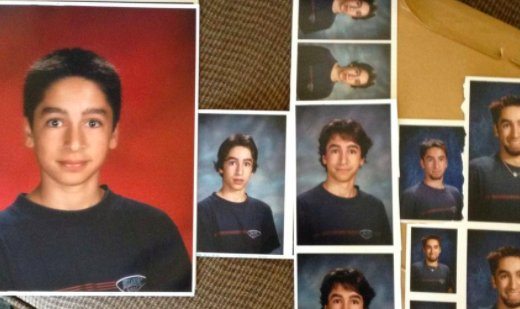 How Long Can a Shirt Last?

How long can a shirt last? That’s the question. As is often the case, we go to Twitter to find the answer.

Let us introduce you to Justin Taylor, who wore the same shirt day after day, and for an incredible seven years. His goal was to wear the same shirt in each and every one of his school photos, from sixth grade right on up until he graduated.

Justin was not a fan of school photo day. He disliked having to get up early, making sure he looked good and then submitting himself to whatever the photographer wanted him to do. His solution was to simplify matters, and that’s exactly what he did, wearing the very same shirt, a black crew neck from Billabong, every day that he had school photos taken.

So from 6th to 12th grade i wore the same shirt in every school photo. My parents weren't fans. I thought it was pretty hilarious. pic.twitter.com/2iL6Hc80ln

Justin’s parents were not all that happy with Justin’s decision and would have preferred a bit more variety in the school pictures. They supported his choice, though.

Needless to say, this sort of endeavor needed to be shared with the world, and the reaction was swift and enthusiastic. Here are some of the comments:

Duyzus: @TheSmarmyBum, I don’t know what is more impressive: the commitment or the fact that you fit the same shirt? haha

This website uses cookies to improve your experience while you navigate through the website. Out of these cookies, the cookies that are categorized as necessary are stored on your browser as they are essential for the working of basic functionalities of the website. We also use third-party cookies that help us analyze and understand how you use this website. These cookies will be stored in your browser only with your consent. You also have the option to opt-out of these cookies. But opting out of some of these cookies may have an effect on your browsing experience.
Necessary Always Enabled
Necessary cookies are absolutely essential for the website to function properly. This category only includes cookies that ensures basic functionalities and security features of the website. These cookies do not store any personal information.
Non-necessary
Any cookies that may not be particularly necessary for the website to function and is used specifically to collect user personal data via analytics, ads, other embedded contents are termed as non-necessary cookies. It is mandatory to procure user consent prior to running these cookies on your website.
SAVE & ACCEPT
SPRING SALE 50% OFF
Subscribe now to get a 50% off coupon code. Don't miss out!
SUBSCRIBE
I agree with the terms and condition
By selecting, I agree I want to receive news, offers, and other promotional materials from Urbanebox, including my email or phone to the contact information I am submitting. I consent to Urbanebox, its affiliates and service providers processing my personal data for these purposes as described in the Private Policy. I understand that I can withdraw my consent at anytime.